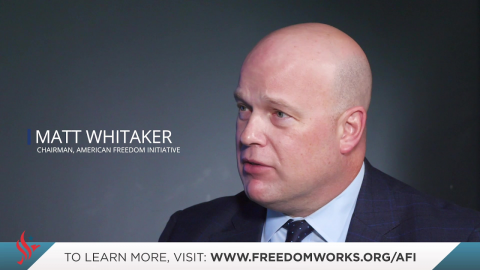 WASHINGTON, D.C. — FreedomWorks is pleased to announce the launch of the American Freedom Initiative (AFI), which aims to recommend deserving individuals to the Trump administration for pardons and commutations.

Chaired by Matthew Whitaker, former acting Attorney General, the AFI seeks to recommend individuals who have been treated unfairly by our criminal justice system. This includes individuals who may have committed a nonviolent drug offense or those who may have run afoul of the administrative state.

The AFI, in coordination with State of the Union guest Alice Marie Johnson, referred Tynice Nichole Hall, Crystal Munoz, and Judith Negron to the administration for consideration. Last month, President Trump commuted the sentences of these three deserving individuals.

Presidential pardons and commutations exist to preserve the legitimacy of the rule of law. The AFI seeks to assist the Trump administration by moving the needle on the issue of criminal justice reform.

WASHINGTON, D.C. — FreedomWorks and the Committee to Unleash Prosperity today announce the publication of …