On Wednesday, the Congressional Budget Office (CBO) released separate reports on the ten-year budget outlook and the financial outlook for major federal trust funds. The reports show the impact of COVID-19 on the economy, the failure of Congress to responsibly manage federal spending, and the cost of doing nothing to put federal entitlement programs on a sustainable financial path.

Between March and April, Congress passed four bills in response to COVID-19 with a total projected impact on the deficit of $2.4 trillion. Partial shutdowns of state economies led to a decline in economic activity and layoffs, increasing the projected budget deficit for FY 2020. The legislative response to COVID-19 and the recession that the shutdown downs caused will lead to a budget deficit of 16 percent of gross domestic product (GDP) for FY 2020 in the report released on Wednesday, an 11.4 percentage point increase from the 4.6 percent projected in January.

The share of the debt held by the public has jumped from the projection of 80.8 percent of GDP in January to 98.2 percent in the new report. Public debt will exceed the size of the economy in FY 2021, which begins next month, and will continue to steadily rise through FY 2030. The CBO doesn’t provide any estimates beyond FY 2030, but one can reasonably expect that it will continue to rise for the foreseeable future. 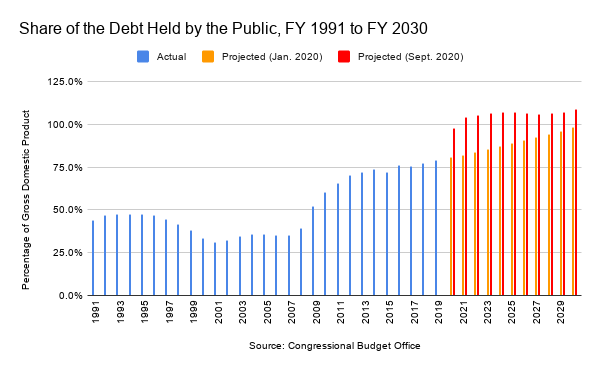 The CBO projects that the GDP and federal revenues will return to pre-recession levels in FY 2022, but the deficit is still projected to exceed $1.8 trillion in FY 2021 because of increased mandatory spending levels and declining revenues. Mandatory spending will decline unless Congress extends certain aspects of COVID-19 spending such as unemployment insurance benefits and Medicaid enhancements. Separating the temporary increase in mandatory spending caused by Congress’s reaction to COVID-19, mandatory spending will continue to rise because more people are retiring and benefiting from programs like Medicare and Social Security. (More on these programs in a moment.) 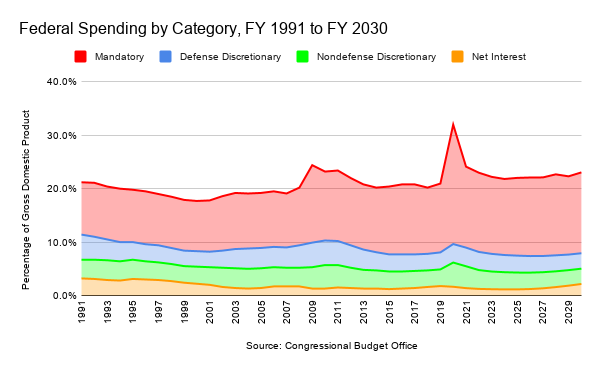 Mandatory spending and interest on the share of the debt held by the public aren’t subject to congressional appropriation. These programs are on autopilot, or “baked in the cake.” Spending on mandatory programs depends almost entirely on the number of beneficiaries enrolled in programs, the largest of which are Medicaid, Medicare, and Social Security. Interest on the debt is determined by the sale of securities issued by the Department of the Treasury to finance debt. 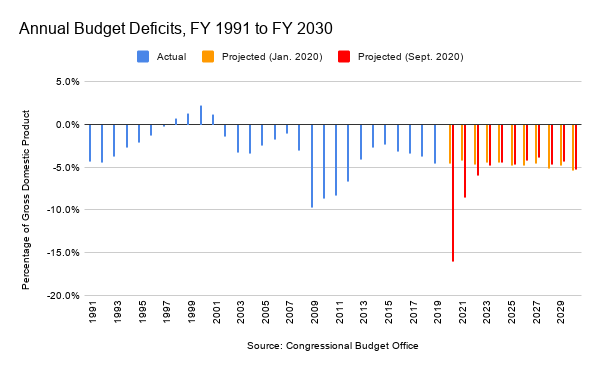 There’s another pretty big catch. The CBO bases its projections on current law and the economic climate. Essentially, it’s a snapshot in time. The effects of COVID-19 spending and the declines in federal revenue largely impact FY 2020 and FY 2021. If Congress passes additional legislation in response to COVID-19 or other emergency relief spending in response to a natural disaster, federal spending and deficits would be larger than projected.

This brings us to the other report the CBO released on Wednesday. Major federal trust funds are going insolvent quicker than expected. This is mostly because of declining revenue caused by the recession. Several trust funds were analyzed in the report, but three of the major trusts funds are Old-Age and Survivors Insurance (OASI), Disability Insurance (DI), and Hospital Insurance (HI). In FY 2019, the payroll tax brought $1.243 trillion into federal coffers, or about 36 percent of all federal revenues. For comparison, the individual income tax is responsible for almost half of all federal revenues. 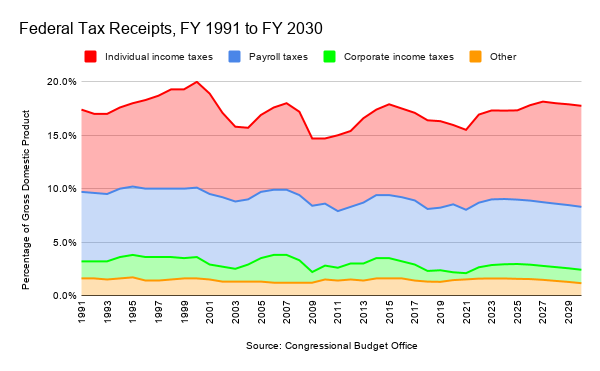 The Highway Trust Fund has two separate accounts, the transit account and the highway account, and is funded largely through excise taxes on gasoline. Congress has routinely bailed out the Highway Trust Fund when it’s on the brink of insolvency, most recently in 2015 with the passage of the Fixing America’s Surface Transportation (FAST) Act.

The Old-Age and Survivors Insurance, Disability Insurance, and Hospital Insurance trust funds were heading towards insolvency because of increased enrollment and declining birth rates. We’re getting older as a society and people are living longer. Life expectancy in 2016 was 78.7 years. Life expectancy in 1945 was 64.7 years.

Not enough workers are entering the workforce to contribute to the trust funds. In 1945, there were roughly 45 workers for each beneficiary. In 2018, there were 2.8 workers for each beneficiary. Some claim that the reason Social Security is insolvent is Congress took money from the Social Security trust funds and never paid it back. This is a myth.

Although the situation is likely worse considering the impact of the recession, the Social Security trust funds face unfunded liabilities — the cost of benefits committed compared to the revenues expected — of $16.8 trillion. Although the Hospital Insurance Trust Fund is funded through a portion of the payroll tax, Medicare is largely not financed by a specific revenue stream. The Hospital Insurance Trust Fund has unfunded obligations of $4.8 trillion, but Medicare as a whole has unfunded obligations of $45.7 trillion.

Congress has options to address the programs. Obviously, reforming the programs in a pro-growth way and giving workers the freedom in their retirement and healthcare options is the best route to do it. The other options are transfers to the trust funds from the general fund of the Treasury, tax increases, or increasing the wage base for Old-Age and Survivors Insurance and Disability Insurance, but the tax increases will hit workers regardless of income and reduce tax home pay, taking money out of the economy, discouraging productivity, and reducing investment.

If Congress does nothing, benefits will be cut across the board.

This is the fiscal state of the United States. The situation was already extraordinarily bad, but the government’s panicked response to COVID-19 has made an extraordinarily bad situation even worse. As has been written here before, the lights on the dashboard are blinking red, but too few in Congress are willing to recognize that our future prosperity and opportunities for the next generations of Americans are at risk. It’s a dangerous game to play.

Previous #FRAPoli: Christian Jacob: “Estrosi’s proposal is surreal and aberrant” – #FrancePolitics #FRPoli
Next #CanPoli: Liberals must come back to work to get Canadians the help they need – #CDNPoli

Last week, we took a look at the Congressional Budget Office’s rather gloomy budget projections …

If you used your free time on Saturday or Sunday to watch football, you may …