Welcome to the new and improved Regulatory Action Center (RAC) Review! RAC proudly keeps you up to date on what we’re up to and what we’re keeping our eyes on here in the swamp. We offer resources for you to get involved in the rulemaking process to hold unelected bureaucrats accountable and occasionally offer praise in the event they have a good impulse. We will also highlight the incredible work our activists have done to advance the principles of smaller government, lower taxes, free markets, personal liberty, and the rule of law. For more ways to get involved and stay informed, check the links at the bottom of this post. 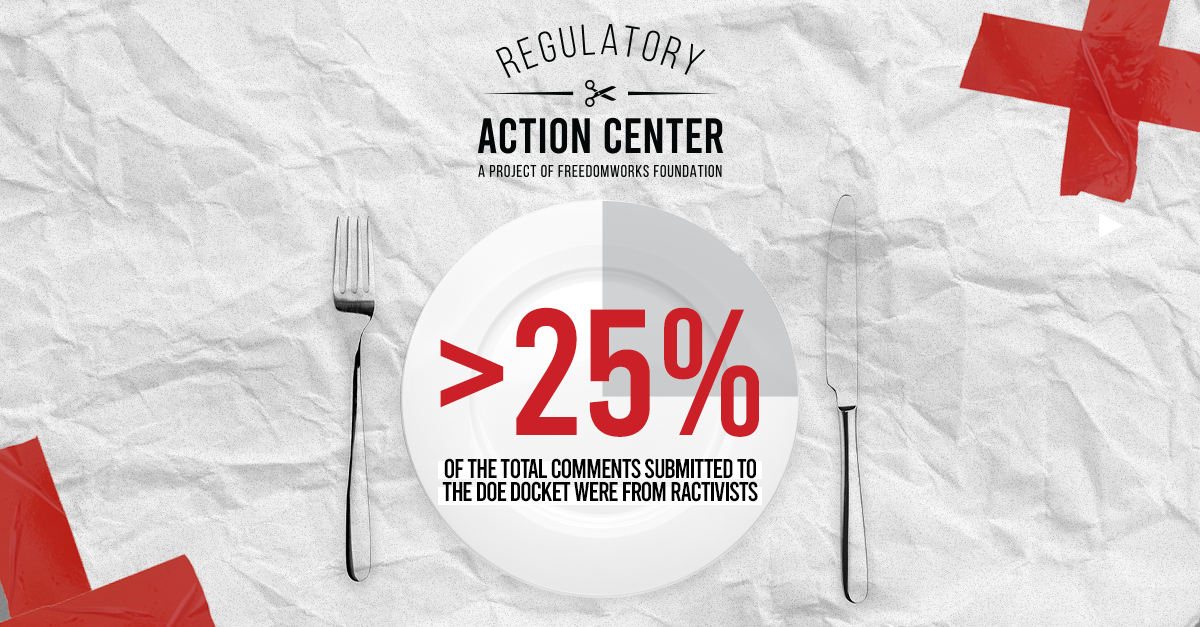 1) Department of Energy Moves to De-Regulate Washers and Dryers

Conservatives scored a key victory when the Department of Energy (DOE) announced they were seeking to create new classes of washers and dryers. This would allow for the manufacturing of washers and dryers that could complete loads in under 30 and 45 minutes respectively. This is also very similar to the successful rulemaking undertaken a year ago on dishwashers. The Regulatory Action Center was crucial in initiating this rulemaking and RACtivists accounted for over one-fourth of the public engagement on this topic.

Blog from FreedomWorks on the earlier dishwasher rule: HERE

2) CDC Wants to Own Your Property Now

The Centers for Disease Control and Prevention (CDC) has now asserted its jurisdiction over… residential leases. Yes, you read that correctly. The agency is moving to end evictions for the remainder of the calendar year. This is a horrifying development for a wide variety of reasons. This is a gross violation of property rights. Landlords rent out their property and receive compensation in return. This is a fairly basic reality for almost any good or service. For the federal government to come in and prohibit landlords from being able to remove people from their own property (especially if they are unable to pay for it) is an effective seizure of said property. It is unacceptable to force anyone to give up their property for free.

Attorney General Barr is moving forward with antitrust action against Google despite legal authorities calling for caution. This isn’t a new step for the federal government. The FTC brought action against Google in 2013 and found no violations of the law. This latest move by DOJ reflects a fundamental misunderstanding of antitrust law. It is meant to protect consumers, not would-be competitors. Given the range of quality services Google provides its customers, claims of consumer harm are dubious.

Just the other week, the FCC overcame another hurdle as the 9th Circuit Court of Appeals largely upheld its authority to curtail certain local and state barriers to the deployment of 5G infrastructure. Of all the deregulatory efforts undertaken by the Trump administration, the most consequential may well be the determined efforts of the FCC to fast-track the deployment of 5G broadband.

You can always sign up to become an elite RACtivist, if you haven’t already, HERE.

Previous #FRAPoli: Frédéric Péchenard: “When a sentence is decided, it must be applied” – #FrancePolitics #FRPoli
Next #UKPoli: Dickson disappointed by Minister during Excluded meeting but retains hope for progress on issue – #UKPolitics