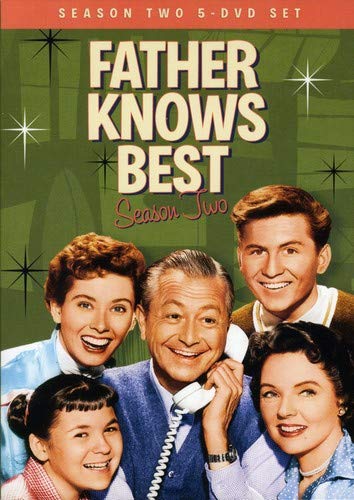 Every evening mid-century, Midwestern insurance salesman Jim Anderson came home, put on his favorite sweater and prepared for an evening with his family-a situation where anything could happen. Robert Young returns to the head of the dinner table to play the patriarch of America’s most beloved family in Season Two of Father Knows Best. Following Season One’s cancellation from its 10:30 p.m. time slot on CBS, fans protested, prompting rival network NBC to pick up the series for a second season. The show became successful when it began airing in August 1955 at the more family-friendly time of 8:30 p.m. A growing number of families began tuning in to see what kind of trouble “Bud” (Billy Gray) was going to get into next, how Kathy (Lauren Chapin) was handling growing up, whether Betty (Elinor Donahue) and her boyfriend du jour would break up and how Margaret (Jane Wyatt) would inevitably hold their universe together. A day in the life of the Andersons was a 1950s suburban dream come true. Join Jim and Margaret and “Princess,” “Bud” and “Kitten” in Season Two as everyone’s favorite ’50s family in Father Knows Best.

Bonus Content:
– Extended Father Knows Best Flashback Episode: “First Disillusionment,” Which Aired During the Sixth Season (11/16/1959)
– Robert Young Western – “Stage to Yuma,” 12/7/1955: The “Lost” Episode of Father Knows Best, Which Hasn’t Aired in Syndication Since the 1980s. As Robert Young Points Out in His Introduction to the Audience, “They Are Doing A Different Show Tonight.”
– “The Teacher” – From Robert Young’s Very Next TV Series, Window On Main Street: This Second Episode from the Long-Lost Series Was Recently Discovered in the Young Family Film Vaults and Has Never Been Seen in Syndication.
– Daddy’s Girls, Part 2: Interviews with Lauren Chapin and Elinor Donahue, the Actresses Who Played the Anderson Sisters, Kathy and Betty.

#MovieDeals: The Life and Times of Grizzly Adams: The Complete Series

#TransferMarketi: PREMIER – Vardy scores own goal and redeems himself

On Saturday, Jamie Vardy scored an own goal but managed to salvage a draw for …